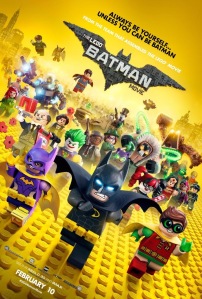 Batman’s back! After having an hilarious co-starring role in The Lego Movie, Batman gets his very own film to run around fighting crime and being a loveable jerk. Voiced by Will Arnet, this Batman isn’t quite like the other big screen variations of the character but it works well within the context of the film

After Batman defeats The Joker for probably the millionth time, they share a scene that resembles a break-up. Joker refers to himself as Batman’s greatest enemy and Batman tells Joker that he doesn’t have a greatest enemy. He’s just fighting a lot of different people right now. He likes to “fight around.” The Joker is hurt and decides to show Batman what’s what by manipulating Batman to send him to the Phantom Zone so he can recruit the worst villains of all time to take down Gotham City and prove to Batman that he’s worthy of the “greatest enemy” title.

END_OF_DOCUMENT_TOKEN_TO_BE_REPLACED

Keanu Reeves has made quite a few great action movies. Speed and The Matrix are arguably the best among them. But now, John Wick and its sequel deserve their spot along side them.

John Wick Chapter 2 takes place fairly soon after the original with Reeves’ Wick tying up a loose end from the original film. After which he plans on settling back down and getting “out” of the business (of murdering people). But one of his old associates asks him for his help, which Wick had promised to give a long time ago. He basically gave a blood oath and when Wick says no, the associate has no choice but to retaliate. Well, John Wick does not appreciate it and plans on getting even.