Bryan Singer’s follow up to X-Men: First Class hits theaters next summer but here’s our first glimpse at the film. It looks more like a sequel to X-Men: The Last Stand with a dark “present day” and Xavier attempting to fix a problem (mistake?) in the past. We also get a quick glimpse of Bishop but sadly no sentinels. I, personally, think it looks amazing. I can’t wait.

Get those chainsaws ready! Superheroes, Movies & Superhero Movies tackles Sam Raimi’s ridiculous, absurd, and hilarious Evil Dead II! Is it a sequel? Is it a remake? Is it both? Prepare to cut off your own hand and check it out now!

The new episode is up! Sorry for the delayed post. This week John and Justin discuss Jon Favreau’s Iron Man from 2008 and without any help from Jarvis! Enjoy!

Back in my early twenties, Robert Rodriguez was my favorite film director. I read his book Rebel Without a Crew, which chronicles the making of his debut film El Mariachi, and admired his passion for movies and his drive to make one of his one. I liked his creativity. He often said if he encountered a problem, he refused to throw money at it (mainly because he had none. El Mariachi‘s budget was a mere $7,000) but instead find a creative way around it. He incorporated his low-budget filmmaking sensibilities into his big-budget Hollywood films. He also preferred to do a lot of the heavy lifting himself. As a twenty-something wannabe filmmaker, I connected with that. I wanted to be a director, an editor, a cinematographer, and a composer. I later found out that sometimes it’s best to have other talented people helping you bring your vision to life. They can (and will) often bring an idea to the table that will make your movie even better. Filmmaking is a collaborative art.

As CGI effects and the use of green screen became more and more popular in Rodriguez’s films, I was worried he would essentially become another George Lucas. With Machete Kills, I believe my fears have come to fruition. Every muzzle flash, every bullet wound and almost every backdrop in this film is completely computer graphics. The films Rodriguez is trying to emulate had none of this. CGI wasn’t around in the ’70s and ’80s. His Grindhouse feature, Planet Terror, used CGI of course but had a considerable amount of practical effects and a charm that Machete Kills is sorely lacking.

END_OF_DOCUMENT_TOKEN_TO_BE_REPLACED 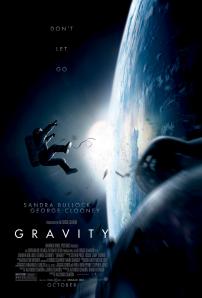 Alfonso Cuaron is quickly becoming one of my favorite directors. 2006’s Children of Men was one of the best films of the year. His follow-up, Gravity (rated PG-13) is now my current favorite film of 2013. That could obviously change as the year progresses, but Gravity is going to be hard to beat.

It stars Sandra Bullock and George Clooney as a medical engineer and an astronaut respectively, who are working in space when an accident leaves them floating adrift. The trailer for Gravity shows quick clips of an accident and Sandra Bullock’s character, Ryan, spinning away in to the black abyss. It was difficult to decipher what kind of story was there. I began to imagine a movie where Ryan is floating away and remembers her life on earth. We get flashbacks of key moments in her life before she ultimately runs out of oxygen and dies, never to be seen again.

Thankfully, Alfonso Cuaron is way more imaginative than I am and we got a much better movie than that.

END_OF_DOCUMENT_TOKEN_TO_BE_REPLACED

Julia Louis-Dreyfus returns to the big screen (aside from voicing characters in Planes and A Bug’s Life) after sixteen years. Her last feature film work was Woody Allen’s Deconstructing Harry in 1997. In Enough Said (rated PG-13), she plays a divorced masseuse named Eva who meets Albert, played by James Gandolfini in one of his last roles. They both have daughters who are about to go out of state for college and they connect and begin to date.

There’s actually a bit of twist to the plot which is revealed about halfway through the film, but is displayed prominently in the trailer. As a courtesy, I’ve decided to leave it out until after the jump. So if you’d prefer to go in fresh and not know, stop reading. If you want to know, read on.

END_OF_DOCUMENT_TOKEN_TO_BE_REPLACED

Joseph Gordon-Levitt’s directorial debut is funny, fresh and an all-around good movie but the subject matter is definitely not for everyone. Don Jon (rated R), which Gordon-Levitt also wrote, is about a guido-esque New Jerseyan named Jon, who is quite the ladies man but also happens to be addicted to pornography.

END_OF_DOCUMENT_TOKEN_TO_BE_REPLACED 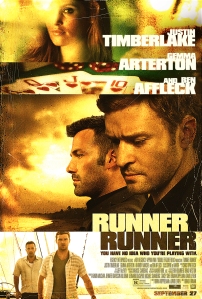 I was hoping for a lot more from Runner, Runner (rated R). Director Brad Furman’s last film was The Lincoln Lawyer, which was a good film and writers Brian Koppelman and David Levien have some decent movies under their belts, including Ocean’s 13, The Girlfriend Experience and Rounders. I was actually surprised to see they had written Rounders as Runner Runner feels like a Rounders wannabe in the digital age.

Justin Timberlake plays Richie Furst, a graduate student trying to make his ridiculous tuition payments by playing poker online. He also steers traffic towards an online poker site and for every player he signs up he gets a fee. His school finds out and says he’s “promoting gambling.” He decides to bet all of his savings in order to raise all the tuition money he needs from now until graduation and, surprise surprise, loses it all. Turns out, however, that he was cheated.

END_OF_DOCUMENT_TOKEN_TO_BE_REPLACED

The Spectacular Now is a solid film and a great coming-of-age story. It’s characters feel real and while the story isn’t incredibly new, it’s engaging and entertaining.

Miles Teller plays Sutter, a high school senior who’s in love with partying, having a good time and his girlfriend Cassidy, played by Brie Larson. When Cassidy dumps him, he drinks a little too much and ends up in the front yard of meek Aimee, played by The Descendant’s Shailene Woodley. They form a friendship that quickly turns into a relationship.