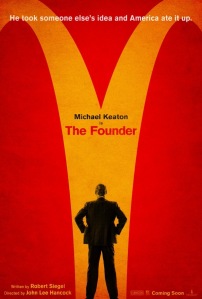 Michael Keaton is on a roll! After starring in two back-to-back Best Picture winners, Keaton aims high with his new role as Ray Kroc, the main who took McDonald’s and turned it into the fast food empire that it is today.

If that synopsis sounds boring, I assure you it’s not.

The film opens in 1954 and Ray Kroc is a struggling milkshake machine salesman. He ends up in San Bernadino, CA and visits a new type of restaurant called McDonald’s, run by the McDonald brothers (Nick Offerman and John Carrol Lynch). The restaurant is innovative in that it serves food quickly. In a time when Drive-Ins were popular, food took forever and your order was rarely correct, the McDonald brothers changed the game. Ray Kroc saw dollar signs but the brothers weren’t all that interested. They had very high standards and when they tried to franchise in the past, it failed. Kroc assures them that he is the man to oversee the franchises and make McDonald’s a national name.

The brothers reluctantly agree to let Kroc in to their business and soon they regret their decision. Kroc gets greedier and greedier the more success he has and he becomes a more unlikeable character as the film progresses.

Keaton shines as Kroc and really owns his performance. The release date of this film is weird and unless it got a really limited release before the end of 2016, Keaton will most likely miss out on an Oscar nomination, which is a shame. He deserves another seat at this year’s Academy Awards. I’m glad Keaton is finally getting the comeback he deserves and I hope he remains in the spotlight for the rest of his career.

The two McDonald’s brothers are played to perfection by Offerman and Lynch. Offerman is Dick McDonald who is the brains behind the operation and is strict and stubborn. Lynch plays Mac McDonald who is the softer brother and perhaps a little too trusting. There’s a wordless moment with Lynch towards the end of the film that is fantastic. Your heart breaks for him. He also deserves some recognition for his role that he sadly won’t get.

The film isn’t flashy and is directed well by John Lee Hancock. The script is well written by Scott Spiegel, who also wrote The Wrestler, which I loved, and Big Fan which was a nice little movie.

Overall, The Founder is a really interesting, if not frustrating, story behind the man who turned McDonald’s into the first and main fast food giant in America. I recommend it.