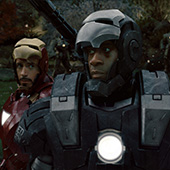 While still in their Phase 1, Marvel decided to re-visit Tony Stark and the suit that made them a whole bunch of money before moving on to other characters such as Thor and Captain America. Technically the third film in Marvel’s Phase 1, Iron Man 2 follows The Incredible Hulk that didn’t do much to rock the box office.

So how does the sequel hold up to the original Iron Man? Did it fare as well as the original (one of the best movies in Marvel’s catalog)? Listen to the guys discuss it below and let us know what you think about the movie in the comments below!