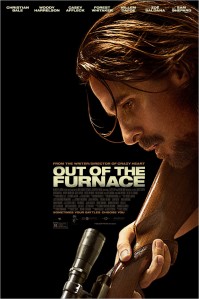 It’s that time of year again. The Oscar contenders are about to be in full force at your local theater. Some have already arrived (Gravity, 12 Years a Slave) while others will be released later this month (American Hustle, The Wolf of Wall Street).  Out of the Furnace might not see a Best Picture nomination from the Academy but it’s a strong movie that might grab a nomination for Best Original Screenplay and Best Cinematography.

This is the second movie for director Scott Cooper. His first, Crazy Heart,  earned Jeff Bridges a Best Actor Oscar and was one of my favorite films of 2009. (I’ve also just noticed the similarities in posters. Cooper apparently likes actors’ profiles)

Out of the Furnace stars Christian Bale as Russell Baze, a steel mill worker who’s just trying to make a good living and be a good person. His little brother Rodney (Casey Affleck) is a gambling addict who keeps getting buried under debt. Russell tries to help him out as much as he can but eventually it gets out of hand. Especially when Russell lands himself in jail after a drunk driving accident kills two people. When he’s finally released, Rodney’s in a mess of trouble with the wrong kind of people (led by Woody Harrelson). 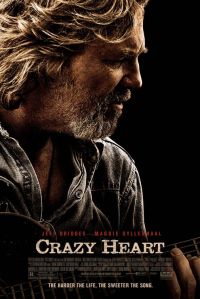 This is a solid American drama. It features a working class family and, although there’s a bit of an underworld aspect, feels very real. The performances from Bale and Affleck are incredible. Zoe Saldana who plays Russell’s girlfriend knocks it out of the park. There’s a scene between Bale and Saldana that is heartbreaking and beautiful at the same time. They are bewitching to watch.

Cooper delivers us a film full of rich cinematography with a score that is subtle yet moving. The final moments of the movie will grip you to your seat.

I give Out of the Furnace an A.