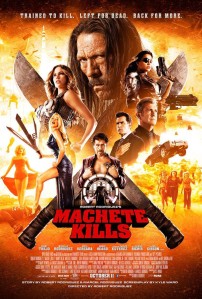 Back in my early twenties, Robert Rodriguez was my favorite film director. I read his book Rebel Without a Crew, which chronicles the making of his debut film El Mariachi, and admired his passion for movies and his drive to make one of his one. I liked his creativity. He often said if he encountered a problem, he refused to throw money at it (mainly because he had none. El Mariachi‘s budget was a mere $7,000) but instead find a creative way around it. He incorporated his low-budget filmmaking sensibilities into his big-budget Hollywood films. He also preferred to do a lot of the heavy lifting himself. As a twenty-something wannabe filmmaker, I connected with that. I wanted to be a director, an editor, a cinematographer, and a composer. I later found out that sometimes it’s best to have other talented people helping you bring your vision to life. They can (and will) often bring an idea to the table that will make your movie even better. Filmmaking is a collaborative art.

As CGI effects and the use of green screen became more and more popular in Rodriguez’s films, I was worried he would essentially become another George Lucas. With Machete Kills, I believe my fears have come to fruition. Every muzzle flash, every bullet wound and almost every backdrop in this film is completely computer graphics. The films Rodriguez is trying to emulate had none of this. CGI wasn’t around in the ’70s and ’80s. His Grindhouse feature, Planet Terror, used CGI of course but had a considerable amount of practical effects and a charm that Machete Kills is sorely lacking.

That’s not to say the film is terrible or anything. It’s entertaining at times. The President of the United States (Charlie Sheen) recruits Machete (Danny Trejo) to go in to Mexico to find out the truth behind a threat made by Mendez (Demian Bichir) about a nuclear weapon pointed at Washington D.C. If the threat is real, kill him. Machete does what he’s asked and flies in to Mexico after meeting with his handler, a beauty pageant contestant, Miss San Antonio (Amber Heard) but the situation is not as it was predicted and soon Machete finds himself on the run with Mendez in tow back towards the U.S. border.

Mel Gibson plays the ultimate baddie behind it all. A weapons manufacturer, inventor, and foreseer of the future. That’s right. He can see the future. Kind of. Until we need the good guy to win and then there’s a throw away line to the likes of “Wait, I didn’t see that coming. When I’m around you, the future becomes unclear.” Even though no real reason is given. Why is the future unclear around Machete? Who knows?

The film feels a little long, even at 107 minutes. Some of the gags get tired and overused and the whole film ultimately feels like one giant set-up for a third film. In fact, before the opening credits roll, we get a preview of said third film titled Machete Kills Again… In Space. I’ll grant you that film sounds cool (and it could very well be) but don’t have us watch 107 minutes of a film that is essentially the back story to part three.

The film is cheesy and corny but its supposed to be. It wasn’t as much fun as I was hoping and I couldn’t help but notice it just looked cheap. There’s a scene at the end between Sheen and Trejo and I’m fairly certain they weren’t together at the time of shooting. Trejo is in at an actual location while Sheen has a very obvious green screened background behind him. Robert Rodriguez has gotten very adept at using his computer to make movies. I just wish he’d go back to his roots and make something a.) a little more serious in tone and b.) with more practical effects and locations.

Overall, I give Machete Kills a C-.