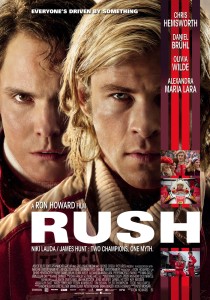 Rivalries can create great tension in a story as well as explain character motivation. They’re also nothing new. From Sherlock Holmes and Professor Moriarty to the Montagues and the Capulets to “Fast Eddie” Felson and Minnesota Fats to Professor Xavier and Magneto, rivalries have been commonplace in storytelling for centuries. What makes a rivalry more interesting is when the two characters are both people for whom you can root. Director Ron Howard and writer Peter Morgan accomplish this in their new film Rush (rated R).

Rush stars Chris Hemsworth (The Avengers’ Thor) as James Hunt, a Formula 1 race car driver who’s a bit of a loose canon and a party animal. He’s cocky and good-looking and that’s gotten him through life so far. Daniel Bruhl (Inglourious Basterds) plays Niki Lauda, an Austrian Formula 1 racer who’s everything Hunt isn’t. He’s extremely intelligent and plays by the book. He knows how to win races because he understands the science behind racing. He doesn’t get the thrill of putting his life on the line like Hunt does.

We see Hunt and Lauda’s relationship from the day they meet as Formula 3 drivers and follow them in to their days competing for the World Championship in 1976. Both characters have moments where they are jerks to one another and right when you begin to side with one character, the other does something to redeem himself. But the movie has more to offer than who wins and who loses. It’s about the professional relationship between two men and how a rivalry itself can actually be rewarding.

The two leads are the best part of the film. Hemsworth proves he’s more than a pretty face with a hammer and Bruhl, who’s mostly known for European cinema, does an excellent job as Lauda. His performance stands out above the rest.

Howard’s direction is top notch and the production design is great. The film feels like it could have come out of the 70s and Howard does a good job of intergrating 70s stock footage into the film without being distracting or fairly noticeable.

My personal favorite aspect of the movie is the score by Hans Zimmer, once again proving he’s today’s top film composer. The score adds to the tension and the suspense but isn’t overwhelming. It fits perfectly within the film and I wouldn’t be surprised if Zimmer gets yet another Oscar nomination.

Rush is exciting and tense, but unfortunately it is bound by the fact that it’s a true story. The ending feels a tiny bit anti-climactic but it’s still a very enjoyable film.