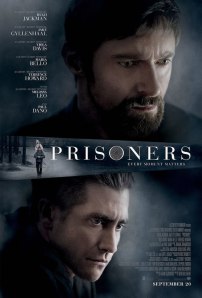 **Short on time? Check out the spoiler-free mini-review below!**

Prisoners is a harrowing drama about two families whose daughters go missing on Thanksgiving day and the lengths to which they’ll go to find them. It’s dark and disturbing at times and makes you question how far is too far when it comes to the life of a child.

Prisoners (rated R) is directed by Denis Villeneuve, the director of the 2010 Oscar nominated film Incendies (which I regrettably haven’t seen but will probably check out now) and written by Aaron Guzikowski whose only other notable credit is last year’s Contraband starring Mark Wahlberg (which I have seen and the two films couldn’t be more different).

On Thanksgiving day in a quiet Pennsylvania town, the Dover family walks down the street to their neighbors’ house. The Birch family welcomes them and they enjoy a nice relaxing Thanksgiving dinner together. Soon after, the two families’ youngest daughters ask to walk back to the Dover’s house. Soon after that, they are missing. Detective Loki, played by Jake Gyllenhaal, is brought in to help find the missing girls.

The film has some incredible performances, most notably Hugh Jackman as Keller Dover. Jake Gyllenhaal is awesome as a detective who has presumably seen so much over the years he’s developed a bit of a twitch. Maria Bello plays Grace Dover and Viola Davis is almost wasted as Nancy Birch, as she’s not in the film much but commands every scene she’s in. Terrence Howard is Franklin Birch and is a nice contrast to Keller’s explosive character. Melissa Leo does a good job as the aunt of the main suspect, played by Paul Dano. It’s nice to see Leo give a good performance again. It seemed to me, after her Oscar win, she had been turning in fairly odd performances.

The visuals are striking, with cinematography by 10 time Oscar nominee Roger Deakins (I was actually incredibly surprised that he hasn’t won yet). It’s dark and gloomy just like the film’s story. You can feel the cold, crisp weather in his shots, even though the film was shot on location in Georgia, so I’m not sure how cold it actually was.

The film is suspenseful and mysterious with twists and turns along the way. I’ve barely skimmed the surface as to the film’s plot in this review. It’s better if you don’t know. It does get a tiny bit melodramatic in certain spots but despite it’s few flaws Prisoners is one of the best films of the year.