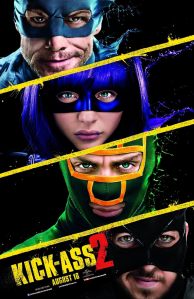 **Don’t want to read the whole review? Check out the mini-review below!**

The original Kick-Ass was a darkly funny, charming take on regular folks who decide to don costumes and fight crime. It was over the top and ridiculous and, with the help of Nicolas Cage, it was a lot of fun. Kick-Ass 2 doesn’t quite reach the bar that was set with the original film. It has its funny moments but overall it feels like it’s trying a little too hard to recreate the magic of the first film.

The first half of the movie could be called “The Adventures of Hit-Girl.” It follows Chloe Grace Moretz’s character much more than Aaron Taylor-Johnson’s Dave, the alter ego of our titular character. Dave is on a bit of a hiatus and growing increasingly bored so he persuades Mindy (Hit-Girl) to train him so he can get back in the game as Kick-Ass. He’s constantly reminded of his “glory days” watching tv and seeing all sorts of costumed vigilantes who have been inspired by his costumed persona.

Just as he’s ready to get back in the game, Mindy makes a promise to her adopted Dad, played by Morris Chestnut, that she won’t go out as Hit-Girl anymore and begins a boring sub-plot where she tries to be a “real” girl. She tries to get interested in all of the things she’s missed out on being a superhero like cheerleading and boy bands!

Not wanting to work alone, Kick-Ass joins the Justice Forever group led by Colonel Stars and Stripes played beautifully by Jim Carrey. Although Carrey has publicly denounced the film for it’s violence, he’s the only part of the film that’s thoroughly enjoyable as an ex-mob enforcer turned born again Christian who wants to beat up the bad guys.

The weakest link in the movie is Christopher Mintz-Plasse as the villain. You’ll remember from the first film that his father was a mob boss who was blown to smithereens by Kick-Ass, so now he’s back to seek his revenge. He claims to be the world’s first super villain. The problem is you just can’t cast McLovin’ as a super villain. He brings no depth to the movie. He’s just a whiny rich teenager and you are constantly hoping that one of his goons will get tired of his crap and take him out. He’s one-dimensional and although he’s a murderer, doesn’t feel all that threatening. One solid slap would bring him down crying.

The writing is a bit clunky. We’re constantly reminded that this is the “real world” and not a comic book. I think I heard that line about twelve times throughout the film. Jeff Wadlow wrote the screenplay and also directs. It would have been nice to get Matthew Vaughn back in the director’s chair. Wadlow fails to deliver a movie with the charisma that Vaughn can. The music is a bit distracting as well. Although the first film used pieces from 28 Days Later and Sunshine, the sequel seems to rely heavily on the 28 Days Later track. I think composer Henry Jackman also just handed in an unused track from X-Men: First Class at one point.

Overall, I’d say skip the sequel and just rewatch the first film. I give it a C-.

You can check out the spoiler free mini-review below.