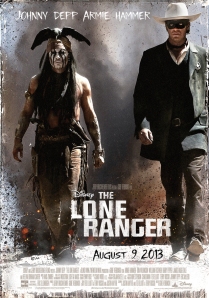 Johnny Depp and Academy Award winning director Gore Verbinski team up again after their success with the first three Pirates of the Caribbean movies to bring the radio legend of the 1930’s to the big screen. Depp plays Tonto, who is upgraded a bit from The Lone Ranger’s side-kick to not-quite-the-main-character-but-also-the-narrator of the story. I was hoping Verbinski and Depp would give us a fun western with plenty of action and laughs but not weigh us down with a complicated storyline like they did with the Pirates sequels. Unfortunately, a complicated story is exactly what we got with very little action and humor that falls flat.

The film starts in 1933 where a young boy, dressed as The Lone Ranger, wanders around a carnival until he enters the “Wild West” tent. It looks eerily familiar to a museum on the inside and when the boy finds his way to the “Noble Savage” exhibit, the exhibit notices him! It’s Depp in a lot of old-age makeup and here he tells the story of The Lone Ranger. This is actually the first problem I have with the movie. There’s no real reason for this, other than the fact The Lone Ranger first appeared on radio in 1933. The film cuts back to the boy and old-Tonto a number of times, either because the boy calls him out on a plot detail he missed or… just to slow us down, I guess. I really don’t know.

The plot is unnecessarily complicated. It deals with the fairly new invention of railway travel, mining silver, and a war between the native Comanche and the “white man.”  That’s probably about as close as I can get to figuring it out.  The beginning starts off with John Reid, played by Armie Hammer, and Tonto aboard a train carrying the film’s baddie, Butch Cavendish, played by William Fichtner, to be delivered to prison. When the train is ambushed by Butch’s gang and Butch escapes, John joins his brother Dan (the local Ranger, played by the great James Badge Dale) in an attempt to re-capture Butch. Things don’t go as planned. Dan and his deputies are attacked and John is the only member of the group to survive. Tonto tells him a spirit horse chose him as a great warrior and that he’s a spirit walker. Because he’s been to the other side, he must wear a mask and remain hidden.

Johnny Depp plays Tonto pretty much how he plays Jack Sparrow, just toned down but obviously for laughs. Armie Hammer is great as Reid in the beginning but unfortunately, never really rises to the hero he’s supposed to become. His last line of dialogue in the movie is “Sorry.”  He’s a little too wimpy to be a hero. I feel like this was done with the intention of making Tonto more of the brains behind the operation but it just doesn’t work. William Fichtner steals every scene he is in as the villain and loves chewing the scenery as much as he does.

The action scenes in The Lone Ranger are it’s only saving grace. The opening train sequence is awesome, even if it is a bit long and the final 20 minutes of the film are its most enjoyable. One of the weird things I have to point out, however, is the terrible placement of The Lone Ranger theme. This would have been much more suitable during the end credits like Star Trek did with it’s original theme from the 60’s. It plays out during the final action sequence and it just feels misplaced. Especially when the rest of the score has more of a modern feel to it. Hans Zimmer score doesn’t add or detract from the movie, in fact, I was surprised to see his name in the end credits. Usually you can recognize Zimmer’s touch.

Overall, this movie’s really not even worth a rental unless you’re just a huge fan of Johnny Depp. Even then, I’d say go rent a better film of his. Like the original Pirates of the Caribbean.